Stan Wood has made his name in the world of palaeontology by finding fossils where people think he won't. Going back to sites thought long-exhausted, doggedly hunting for the 'right' rocks in places where others may have given up. Wading out to waist-deep water before beginning to dig. For twenty years, Stan was convinced there were fossils in the Scottish Borders that could help plug Romer's Gap. Eventually, in 2008, he began to find them. Not much of a surprise for those that know him, the stubborn old goat.

The material Stan has dug out of a few Borders site in the past few years shows a range that suggests a relatively healthy biodiversity existed at a time when it had been thought atmospheric oxygen levels and the after-effects of the Devonian extinctions had left (at least marine) life reeling a little. The tetrapods at the end of the Devonian were not terrestrial in general, but by the end of the Gap, 345 million years ago, they had made a successful colonisation of land. The positioning of Romer's Gap in the fossil record meant their invasion of terra firma has been hidden from us. 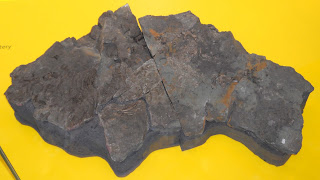 Rather than accepting the idea that there simply wasn't much to find, Stan went out and found something. The exhibit, on at the National Museum of Scotland on Chambers Street in Edinburgh until the 29th of April, shows a millipede, plants, fish, a eurypterid and some amphibian bones. The star, however, has got to be Ribbo. Yet to receive its full scientific name, the nickname is due to its sturdy ribs. It's in a bit of a mess, disarticulated and a little scattered, but Mike Coates' reconstruction, below, shows how the animal may have looked in life. Probably a little less yellow.

The material isn't the most aesthetic, but its contribution to science is enormous and it will be heavily studied to squeeze as much information from the 350 million year-old limestone as possible. The University Museum of Zoology in Cambridge has more material from the sites, but I'm glad Ribbo has been housed in the same museum as Lizzie. Seems right, somehow.

Whether the Traps on their own were enough to cause all the destruction is a matter for debate. Although the K-T event that snuffed out the dinosaurs is heavily associated with a meteorite impact, there was more going on at the time. The Deccan Traps in India, another huge volcanic series, are considered an important factor. Inevitable comparisons prompted the search for a corresponding meteorite for the Great Dying. So far, though, a suitable culprit has not been found and it's not likely signs of a crater would have survived this long in any recognisable state. It's possible, though, that a series of problems was triggered by the formation of the Traps which combined in effect to compound the difficulties life on Earth was facing. Methane released by the Siberian eruptions led to a severe episode of global warming, damaging enough in itself, but also subsequent oceanic anoxia as a dropping temperature differential prevented adequate circulation of oxygen within the waters. Chain reactions...
It's reassuring to place these occasions in the context of geological time. We're not likely to see volcanic activity on the scale of the Siberian or Deccan Traps. If we do, though, it'll be pretty bad news. Even panic buying rice and beans may not be enough to save us.